Its impact is as prominent as ever, even after nearly two decades. 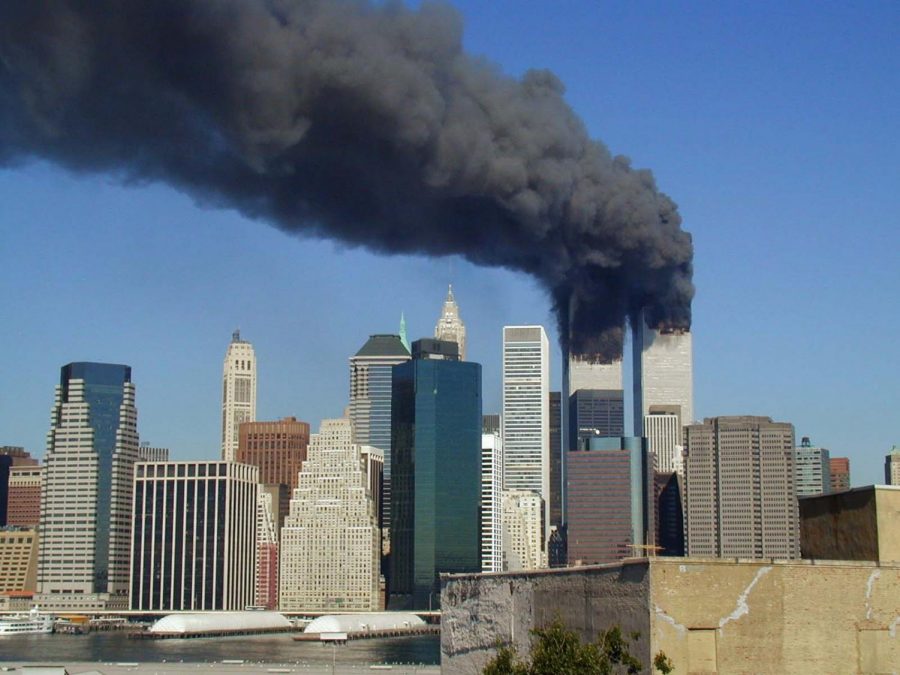 The World Trade Towers smoking in the aftermath of the attacks.

On Sept. 11, 2001, now known as 9/11, a tragedy befell America that has yet to be matched in sheer magnitude and impact. It was an assault that threatened to bring down the spirit of the country itself. 19 militants associated with the Islamic extremist group al

Qaeda hijacked three planes to carry out three serial attacks. The group targeted the World Trade Center in New York City as well as the Pentagon in Washington, D.C. Passengers aboard the third plane thwarted its attack, causing it to crash land in Shanksville, Pa. The intended target of this plane remains unknown, but speculations include the White House and the U.S. Capitol. These series of events, coined the 9/11 attacks, took the lives of roughly 2,996 people.

These are the statistics that we have learned year after year, if not in school then from the internet or documentaries. However, it is still impossible for the current generation to imagine the grief America experienced that day. They can only try to come close, by listening to those who were there and those who saw it happen. Brian Prusicki, a Stock Broker Trainee at Roan Heyers, in New York, was one of these people.
First-Hand Accounts of 9/11
The first plane struck the north tower when he was on his way to work. As a result, the subway system evacuated into Journal Square. He saw the first tower fall from across the Hudson River. Seventeen minutes later, Prusicki saw the second tower collapse. To this day he can still smell the horrible stench of burning metal and flesh and see the panicking crowds surging in tidal waves through the streets. The flashing lights of red, white and blue from ambulances, police and fire trucks ingrained themselves into one’s eyes wherever they looked. Eighteen years later, as the brother of our Journalism teacher, Mr. Prusicki would come to our Journalism class to talk about his experience that fateful day. Another speaker was one of the school’s History teachers, Edward Kaul.
Kaul’s Story
“It was a beautiful, crisp Tuesday morning,” Kaul stated. “No one could have ever imagined what was to come.” When the first plane hit the towers at 8:46 a.m., Kaul was teaching Law and Society at JFKMHS. A co-worker told him that a plane had hit the twin towers. Since there had been similar incidents in the past, Kaul hadn’t thought much of it at that time. It wasn’t too long until the second plane struck the south tower and then all chaos broke loose in the classrooms. Kids were yelling, crying, breaking down into hysteria in the middle of class. When he heard the news, one kid, notorious for being a troublemaker, collapsed into tears in the hall. His sister worked at the towers. None of the teachers knew what to do.

“We were never taught how to handle the students in the incidence of a catastrophe like this,” Kaul said. He remembers that although school went on, nothing was taught and the topic of the attacks were almost taboo in the following weeks. Students were trying to telephone their loved ones, while their loved ones were trying to telephone them. As a result, there was a constant stream of kids going in and out of the office. Mrs. Prusicki, our Journalism teacher, was a senior in Kaul’s class when the attack occurred. She remembers the devastation of her classmates. Like the others, she immediately tried to reach out to her parents and siblings. Many parents were rushing to school to take their kids home. There was panic all throughout the schools and offices, and no one, not even the administrators, could do anything to stop it.
Mr. Prusicki’s Story

Prusicki was present on the other side of the Hudson River during 9/11. He witnessed the aftermath of both the planes crashing into the Twin Towers. Moments after the crash, the north tower collapsed, releasing smoke and deadly fumes into the  atmosphere. Everyone couldn’t believe their eyes. Prusicki stood with hundreds of frightened people after he was evacuated from the subway. He spotted a man with a radio and in a matter of seconds, a huge crowd formed around the man. They heard the unbelievable news that there had been a terrorist attack on the towers. This resulted in total chaos. Before they could recover from this traumatic news, Prusicki and hundreds of others saw the second tower collapse.

At this almost incomprehensible sight, everyone scrambled to call their loved ones. However, since the attack destroyed the telephone tower, no calls could go through. Prusicki, along with the others, rushed to the telephone booths and tried to call home. His call reached his stepfather who informed the rest of his family of his whereabouts. Meanwhile, Prusicki saw panic spread throughout NYC. The city went under lock-down. Prusicki was an eyewitness to many deaths that day. He noticed people jumping off of the towers as they were collapsing in an attempt to give themselves a less painful death. He saw countless families destroyed. These families included those of the workers in the towers and those of the emergency respondents, many of which gave their lives to help others. 9/11 was declared a national tragedy. Prusicki, along with millions of others, will never forget this horrible event that happened to America.