The tradition continues after one year off from COVID-19. 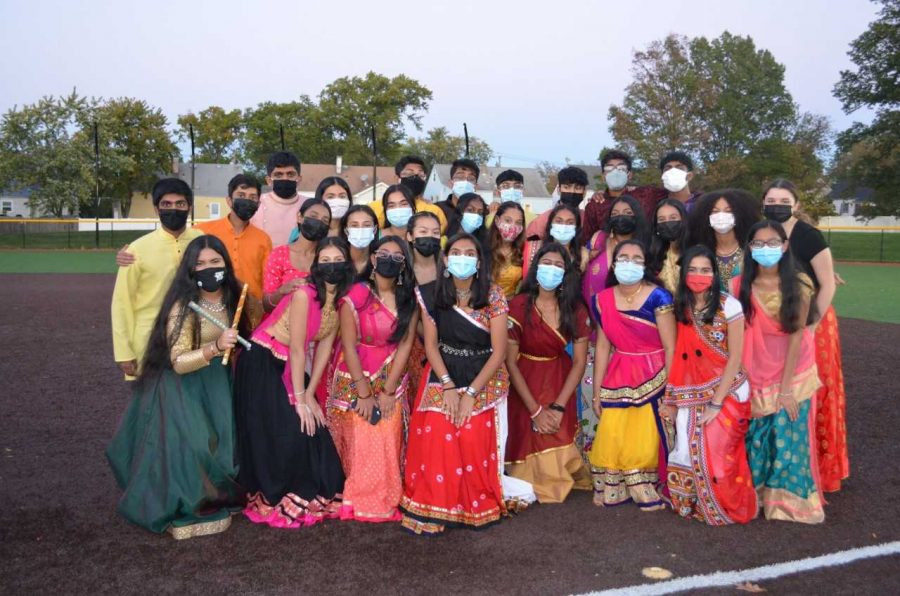 A group of seniors, all wearing traditional Indian attire, pose for a picture.

John F. Kennedy Memorial High School participated in their second big event of the 2021 school year. The National Honor Society hosted the garba, a traditional Indian dance, on Oct. 20, 2021, from 6 p.m. to 8 p.m. on the JFK softball field. Two years ago, the 2019-2020 chapter of NHS organized the first garba dance, but due to COVID-19, NHS was unable to host it the last year.

According to NHS advisor Colleen Kurowsky, turnout at the garba dance this year was better than expected.

“I was very hesitant because of the pandemic, with mask-wearing even though we were holding it outside,” Kurowsky stated. “And keeping social distance, how that was all going to go. If the kids would be still into coming, even though they had to wear the mask? But it was fabulous. We had over a hundred students attend and they had a great time.”

COVID-19 restrictions caused changes in the event. For example, there was no food available at the dance this year, unlike two years ago. The event was also held outdoors due to restrictions in the number of people allowed indoors. Despite all of the changes, students were enthusiastic about attending the dance.

All students at the garba dance were dressed in traditional Indian clothing. Even students who didn’t own traditional clothing borrowed clothes from their friends, like Senior Cameran Comollo who attended the dance wearing Indian attire.

“I dressed up in traditional wear and I felt really pretty,” Comollo said. “A lot of people said that I looked nice and that made me feel good, and it was fun dressing in cultural wear cause it’s not something that I would be able to do normally.”

Although some students didn’t know how to do garba initially, they were able to catch up with those who did.

“I think I was able to catch on with most of them,” Comollo explained. “If I didn’t know it, my friend taught me, and even if I wasn’t doing the best, I still tried to get in the circle and tried to stay out of people’s way though. And people were understanding if I accidentally stepped on the back of their foot, so it was fun.”

The 2021-2022 school year began with a bang after being virtual for more than a year and a half. All students and faculty who were present at the dance had a great time, solidifying the garba dance as an annual event at JFK.